The BioArchive® System is the only fully robotic storage and retrieval system for cryopreserving high value cell samples.

Insurance Today, For a Viable Future. 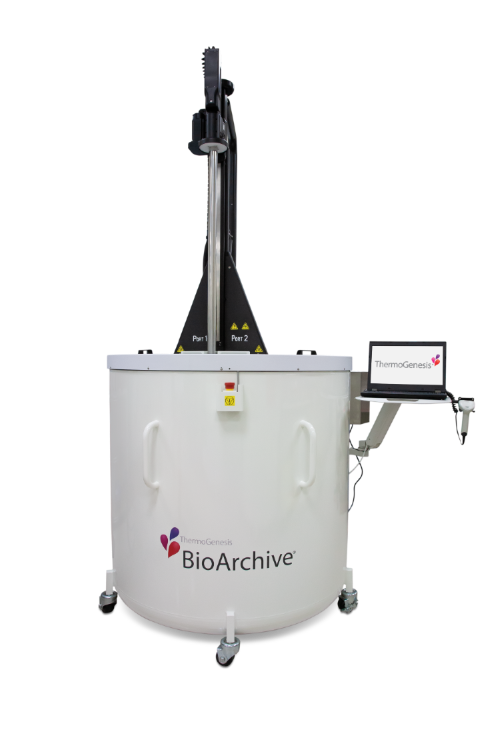 The BioArchive® System consists of the following key components:

Tracking with Certainty. Storing with Confidence.

Safety for Samples. Safe for the Operator.

* When used in conjunction with the AXP® System.

Working with the BioArchive® System

Preparing a Sample for Cryopreservation and Storage

The dewar’s storage racks have approximately 3,600 individual storage positions “addresses” for 25 mL samples. The addresses are arranged concentrically so that every storage location can be accessed by the periscope assembly.

Two small ports on the dewar lid provides access to the inside of the dewar. These ports are used for insertion of the Control Rate Freezers and Retrieval Cartridges and are covered when not in use. Minimizing the size of the opening reduces LN2 evaporation, provides an added safety measure for the user and ice formation.

A controlled-rate freezer module (CRF) is used to hold the sample during the freeze cycle. It also monitors the freeze cycle and facilitates the execution of a freeze profile. The CRF is inserted into a port on the BioArchive System allowing the canister to be suspended in the liquid nitrogen vapor once in the port. A small electric fan, mounted at the rear of the CRF doors, is activated forcing nitrogen vapor through the interior of the chamber, and controls the flow of LN2 vapor over the sample. Two sensor probes, also found on one of the CRF doors, monitor the temperature of the sample and sends a signal to the fan to adjust its speed. This precise monitoring allows for superior accuracy in the control rate freezing process which is vital to maintain cell viability.

The retrieval cartridge is used for retrieving frozen samples. It holds a foam canister sleeve designed to slow the warming of a removed canister.

The periscope assembly is an electromechanical system that transports a canister containing a sample from the controlled rate freezer (CRF) module to a specific storage address in the dewar. It also retrieves the frozen sample from its storage address when it is needed.